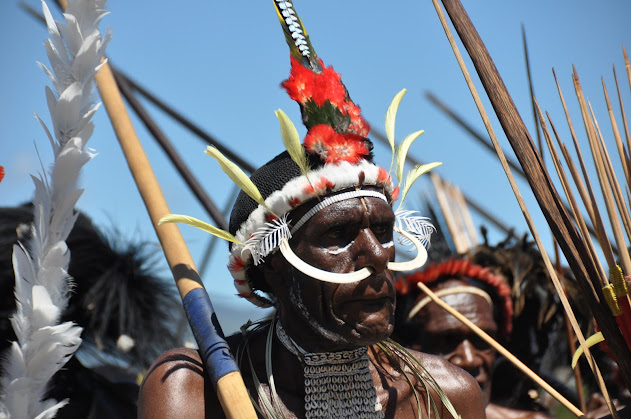 The Baliem Valley Cultural Festival 26th will be moved to the District of  Walesi from the district  Wosolimo in which the last six years the festival was held. Why? The distance from Wamena to Wossilimo too far away as well as conditions that are less secure areas related to the problem location is still a heated debate among the public Wosilimo.

So apparently the situation as expressed by Regent Jayawijaya Wempi Wetipo. On the official web page Jayawijaya District, said that during the six years of operation in Wossilimo not affect changes in areas including economic development for the people residing around the site. In addition, many people who are not responsible for and tend to fail of execution of this event.

He said that the implementation in 2014. is a silver jubilee and good moments, but they are not even a decline in the number of local and foreign tourists who previously increased. However, we are grateful that the implementation goes well though with limitations.
Based on the conditions and circumstances that exist in Wosilimo, then the government will conduct a thorough evaluation regarding the conduct of the Festival. However, it is recognized that the government will organize the next festival in Walesi District. The government also plans to buy its own location and create a permanent location for the implementation of the Festival shaped stadium.

Furthermore, we will cooperate with EO (Event Organizer) which has a reputation for conducting the festival. The festival is expected Good quality can be implemented, because the event is not even Local event  but has become the International event.

40 districts in Jayawijaya, as many as 36 districts also follow the race attractions. Implementation of this festival also gives a special gift to the participants who are considered the best. Regent directly provide guidance to each representative Fund participants who won the race and will be used for the development studio.

The Baliem Valley Festival in Papua Wamena will be held in Walesi village. During this festival of baliem valley we also recommend you to do a little trek in baliem valley, this we already provided in the special

This is the one occasion when all the diverse tribes from the highlands of Wamena and the Baliem Valley such as the Dani, Lani, and the Yali congregate to celebrate their annual festival. This year the festival will be centered in the district of Jayawijaya. Located high in the Jayawijaya mountains on the Indonesian side of the island of New Guinea, Baliem is a stunningly beautiful green valley long hidden beyond soaring hills.

Highlight of the Festival is the mock tribal warfare held to maintain the agility and preparedness of the tribes to defend their villages.

To prepare for these mock battles, organizers have prepared an arena of 400m by 250m that will be filled with 500 to 1000 of warriors and dancers.

The tribal war simulation is scheduled to be held during two days featuring about 26 groups of 30-50 warriors. These mock battles are accompanied by the Papuan traditional music of Pikon. Pikon is a musical instrument made out of wood skin which produces sounds when one blows it. The sounds created produce soothing music. Not many people can play the instrument as it requires special skills.

Organized by the district government of Jayawijaya, the festival is aimed to introduce and preserve the values and culture of Baliem Valley’s traditional tribes. The Baliem Valley festival will be enhanced by various fascinating art and cultural performances, including traditional Papuan dances, pig racing, Puradan Rattan Spear Throwing, Sikoko Spear games, Papuan traditional musical performance, and many more.

There will also be a special competition of Sege throwing and archery competition for foreign visitors as a sign of appreciation for their attendance. Visitor can also experience the true meaning of being a Papuan by wearing the traditional costumes of Koteka and have their skins blackened so they can also be part of the festivities.

Join the crowd and learn what makes them smile, laugh, and cheer. The Baliem Valley Festival 2015 awaits, offering abundant memories of the magical land of Papua.

To reach Baliem Valley fly to the town of Wamena via Jayapura. There are regular flights available to Jayapura from Jakarta and Makassar.  To attend the Festival it is best to contact an experienced travel agent.

For complete information on the Baliem Valley, including flights, operators, how to get there, where to stay, and what to do, you can visit our: Baliem Valley : Home of the Dani 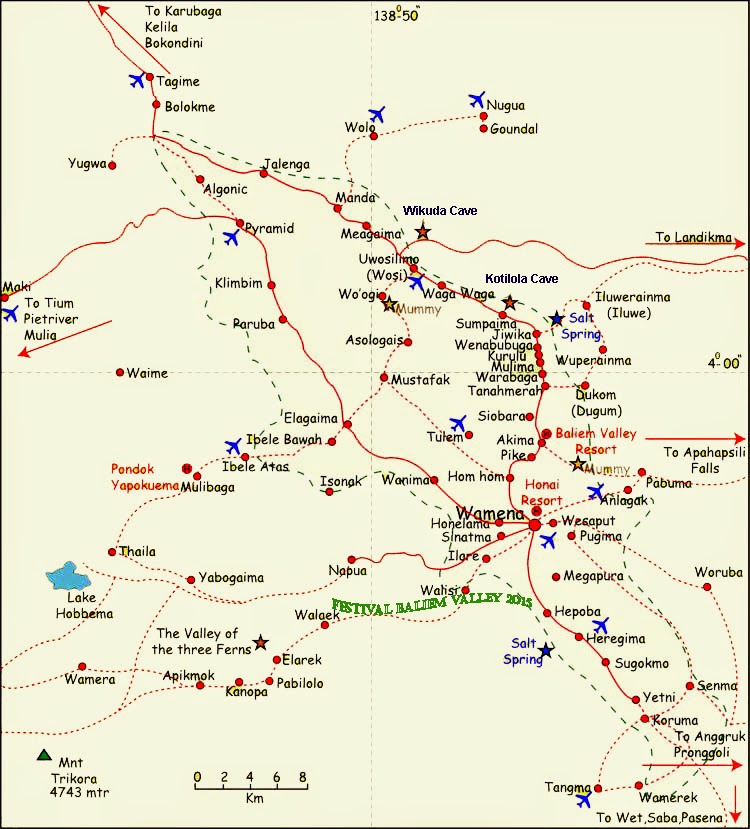 Tips:
New Regulation from government of Indonesia, that you don't need anymore Surat Jalan / travelling permit, to come to Wamena, so you just need to have a valid Passeport and Visa.

you need to know due to new regualtion from regent of Wempi wetipo that no alcoholic drink can be bought in hotel and restaurant in Wamnea, so you need to buy it from jayapura.

you have right to know, that in Sunday, start from the morning until 17;00 the small shop, restaurant public bus is forbiden to operate,

A Guide is needed to explore the valley
The best time to visit is between March and August
If you travel during the rainy season, prepare yourself with cold weather gear
Ask your guide about Do’s and Don’ts in the Baliem Valley

High up in the mountains of central Papua at an altitude of 1,600 meters above sea level, hemmed in by steep green mountain walls, lies the stunningly beautiful Baliem valley, home of the Dani tribe.

Baliem valley is 72 km. long, and 15 km to 31 km wide in places. It is cut by the Baliem river, which has its source in the northern Trikora mountain, cascading into the Grand Valley, to meander down and further rushing south dropping 1,500 meters to become a large muddy river that slowly empties into the Arafura Sea.

The first outsider to discover the valley was American Richard Archbold, who, on 23 June 1938 from his seaplane, suddenly sighted this awesome valley dotted with neat terraced green fields of sweet potatoes, set among craggy mountain peaks. This is Indonesia’s own Shangri-La.

Only recently emerged from the Stone Age, the Dani are known as the “gentle warriors”. With their simple tools of stone and bone, they nonetheless, managed to sculpt green fields that hug the hills, where they grow root crops, and raise pigs. They have also built outposts and lookout towers to defend their valley from hostile tribes.

Because of the fertile soil and their agricultural skills, the Dani together with the sub-tribes of the Yali and the Lani, are, therefore, the most populous in Papua, living scattered in small communities near their gardens among the steep mountain slopes. Today, they also cultivate bananas, taro and yams, ginger, tobacco and cucumbers.

The men’s and women’s huts (locally called the honai) have thick thatched roofs, which keep the huts cool during the day and warm during the cold nights.

By trekking, you can witness traditional ceremonies, traditional markets and the way of life of the  Dani. There are a very limited number of restaurants inside the Baliem Valley. Your tour guide can bargain with the Dani people to provide you with simple meals. It’s strongly advised that visitors bring their own meals and snacks during trekking through and around Baliem Valley. Meals and snacks can be bought at grocery stores in Wamena.

To make your trip easier and to get the most value, it is advisable to find a packaged tour offered by several operators.
some interesting link
how to get to Raja Ampat :
http://www.stayrajaampat.com/ultimate-raja-ampat-guide/information/how-to-get-to-raja-ampat/
http://www.indonesia.travel/en/destination/248/raja-ampat